That and much more.

“Why do people take things so seriously?”

A couple of nights ago, I accidentally came across a program which featured a female performer and her band.  I decided to find out more about them online  and  to my dismay I found a rather unfortunate article. It was written in 2011, so this characterisation may not still apply and I sincerely hope it does not, but the article claims the lead vocalist is reportedly quite misogynist and her band is quite homophobic and misogynist. The female performer – Syd Tha Kid -happens to be lesbian and Black. I’m aware that misogyny, sexism and homophobia are still fairly widespread in most genres of music today but it’s always disappointing when yet another new performer emerges and we find out that they may do nothing more than reinforce discrimination against women and LGBTI people.

I posted the article’s link on  the band’s Twitter page in the faint hope that they might consider it or clarify. The band didn’t deny anything and tweeted back “lol someone’s living in the past“.  I would like to think their reply meant they no longer held those views but sadly I don’t think so. One of their followers — a young Black woman — took exception to my posting the article on Twitter and replied to me “Why do people take things so seriously?”  I replied, that we should take misogyny, racism, heterosexism, sexism seriously because they cause violence.

I thought if this young woman’s reply was sincere, and she didn’t understand why we should take misogyny and homophobia seriously then she was either not paying attention, or didn’t have any insight into the issue, or just doesn’t care and thinks this is acceptable. I thought it was a rather a sad comment which doesn’t understand the power of words and actions, the power of discriminatory attitudes and how these attitudes always lead to violence. We only have to look at the levels of violence against women today to see whether sexism and misogyny should be taken seriously. So let’s look at a few facts:

Based on country data available , up to 70 per cent of women experience physical or sexual violence from men in their lifetime – the majority by husbands, intimate partners or someone they know. Among women aged between 15 and 44, acts of violence cause more death and disability than cancer, malaria, traffic accidents and war combined.

Femicide ─ the murder of women because they are women

In the United States, one-third of women murdered each year are killed by intimate partners.
In South Africa, a woman is killed every 6 hours by an intimate partner.
In India, 22 women were killed each day in dowry-related murders in 2007.
In India currently 60 million women are missing and have either been aborted before birth, killed once born, died of neglect because they were girls, or perhaps murdered by their husband’s family for not paying enough dowry at marriage.
In Guatemala, two women are murdered, on average, each day.
In Australia, a woman is killed almost every week by a male partner or ex-partner.

Women and girls comprise 80 percent of the estimated 800,000 people trafficked annually , with the majority (79 percent) trafficked for sexual exploitation. In 2011, 23,000 women were abducted in China.

Approximately 100 to 140 million girls and women in the world have experienced female genital mutilation/cutting, with more than 3 million girls in Africa annually at risk of the practice.
Early marriage is a form of sexual violence which sees over 60 million girls worldwide are child brides, married before the age of 18, primarily in South Asia (31.1 million in South Asia and Sub-Saharan Africa (14.1 million). In Yemen in Sept 2013, a young 8 year old child bride died on her wedding night from sexual-related injuries.  According to Human Rights Watch, 14% of girls in Yemen are married before age 15, and 52% are married before age 18.

Sexual violence against women and girls

As many as 1 in 4 women worldwide are physically or sexually assaulted while pregnant.
An estimated 150 million girls under 18 suffered some form of sexual violence in 2002 alone.
As many as 1 in 4 women experience physical and/or sexual violence during pregnancy  which increases the likelihood of having a miscarriage, stillbirth and abortion . Up to 53 percent of women physically abused by their intimate partners are being kicked or punched in the abdomen.
In Sao Paulo, Brazil, a woman is assaulted every 15 seconds.
In Ecuador, adolescent girls reporting sexual violence in school identified teachers as the perpetrator in 37 per cent of cases.

Rape as a method of warfare

Approximately 250,000 to 500,000 women and girls were raped in the 1994 Rwandan genocide.
In eastern Democratic Republic of Congo, at least 200,000 cases of sexual violence, mostly involving women and girls, have been documented since 1996, though the actual numbers are considered to be much higher. Rape has been used in warfare throughout history.

Judging by these statistics, it’s clear we live in a patriarchy.

Regarding heterosexism and homophobia and their relationship to violence, if one does research on violence and bullying of  LGBTI people today, it is significant despite advances on the front against heterosexism.

And let’s not forget the most invisible and widespread form of discrimination — speciesism — and consider what results from our speciesist attitudes towards nonhuman animals as we continue to use them as resources. We torture and murder more nonhumans animals (mainly for food) in a 3 to 5 day period than all humans killed in wars, genocide, famines, plagues and murders throughout history. Should we take this seriously? We certainly should and the way to take this horrific violence and injustice seriously is to become vegan.

Considering the violence resulting in all forms of discrimination, we can not overstate the importance of taking any form of discrimination seriously if we believe these groups ( human or nonhuman) morally matter.

If I may be a little candid. I am often astonished and saddened when I hear women preface their comment with “I’m not a feminist but …..”, as if being a feminist is a bad thing; as if being a feminist is something to be a shamed of and something we need to back away from. I sometimes have to stop for a moment just to make sure I have heard correctly.  Is social approbation so important to us? Are are we so fearful of being called “crazy”, one of many slurs used against women throughout history who dared have independent thought and who voiced their strong opinions?  Are we that disempowered as women, or lacking insight, or misogynist, or morally weak that we  would rather turn away, play down, or deny there’s a very serious problem that needs addressing? I am astonished and saddened when I see or hear young women (or any women) being misogynist and sexist or defending misogyny and sexism. I’m saddened when I see women in the public eye –who have an opinion which differs from mainstream thinking– having their appearance criticized instead of their opinion. We witness this all too often.

If ever there were ever a time we need more feminists, it’s now.

Sexism and misogyny are rampant and ubiquitous in our society. It saddens me that some young women seem to have internalised societal misogyny. They have internalised the hatred and are projecting it on to other women. You only have to read the stomach-churning live Twitter stream under Twitter hashtags regarding female celebrities or women in the public eye. One only has to read the comments, articles or interviews in the mainstream media or read comments on Youtube, Facebook and other social media to witness the endless gleeful hatred of women and how it goes unchallenged to realise how socially acceptable it is. It sometimes appears as if the very mention of a woman in the media is seen as an invitation to attack. Is it any wonder we have horrifying and outrageous statistics today of violence against women? I would have thought by now in the 21st century society would be taking sexism seriously but that’s not the case. In fact it seems in many ways we are going backwards. 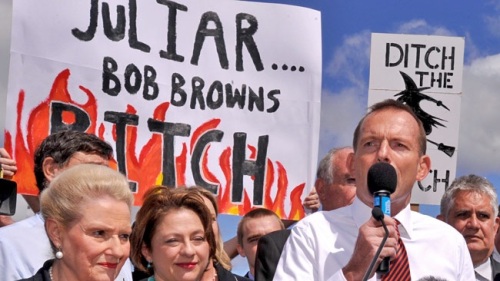 In Australia the media (70% owned by Rupert Murdoch) and certain sections of the  public directed a relentless stream of misogyny and sexism at our first female Prime Minister Julia Gillard. Last night she was interviewed for the first time since her removal as prime minster a couple of months ago and she said at times she felt “murderous rage” at the sexism directed at her. It felt that every time she was attacked because of her gender, that it was an attack on all women. It was truly horrible. Please watch former Prime Minister Julia Gillard give her speech criticising the current Prime Minister Tony Abbott’s history of misogyny.

We need to consider that all forms of discrimination are just faces of the same ignorance and where we have one form of discrimination, we will have all forms. While there is speciesism we will have sexism, racism, heterosexism and so forth and we will continue to “otherise” and objectify. We will continue to inflict violence against certain vulnerable groups and this behaviour ultimately makes us all the poorer and demeans us.  As Martin Luther King Jr said “Injustice anywhere is a threat to justice everywhere”.

Comments Off on “Why do people take things so seriously?”